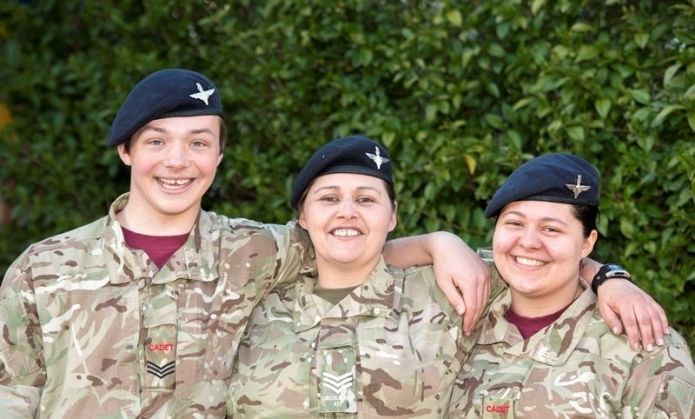 Sally-Anne Feary joined the Army Cadets as a Civilian Assistant after her daughter persuaded her to help out at the local cadet unit. Three years later she is now Detachment Commander of Long Sutton Detachment, Lincolnshire, and has helped hundreds of cadets to develop and grow into mature young adults – including her own two children. In fact, Sally-Anne's daughter Shannon is now also an ACF adult instructor.

“Before I joined cadets, I suffered with depression and anxiety which led to all of my hair falling out and not leaving the house for four years. When my daughter came home from camp one weekend, she told me that there were not enough female adults and she asked if I would consider joining. Of course I said no, but she persisted and later on that year, I went to Long Sutton detachment just to see. That was the first time I had left the house in a long time. It took a lot of courage and I have never looked back since. Joining the Army Cadet Force has taken me from the person I was and has made me who I am today. I am so much more confident in my own ability and no longer take life for granted.”

Sally also credits the friends she has made within the ACF as having a big influence on her life “The biggest benefit I have gained from the ACF is friendship. There are adults both within my detachment and outside who have made the adult training and cadet camps awesome, not only by passing on their knowledge and experience but by helping me to increase my confidence and letting me be myself.”

Being in cadets with her son and daughter has also strengthened the family’s relationship. “It has brought us much closer together than just being a family could. I no longer moan when they come home from camps as I now know it is not a holiday and they work hard. We talk a lot more than we used to and have a greater amount of respect for each other. Whilst I am their mum at home, I am Sergeant Instructor mum at Cadets, not just to them but to everyone. I listen to the cadets’ worries, I tell the girls bedtime stories on camp, and make sure everyone is eating properly and brushing their teeth!”

Sally’s daughter is now at university and has gone back to the Army Cadets as an adult instructor just like her mum. “Joining the Army Cadets has inspired her to achieve more in life, she is assertive and organised, but more than that, and like so many others, she has some wonderful friends thanks to the Cadets.”

“When I started, I was very ill and despite my appearance, the cadets were very accepting and they are a large part of my recovery. With the challenges cadets set me, it gave me a reason to get out and have some fun. If you don’t try, you will never know. I am the least military person you will ever meet, so if I can do it so can anyone – don’t make excuses for yourself because there are cadets out there who will benefit from you being there (and you will benefit too!).”