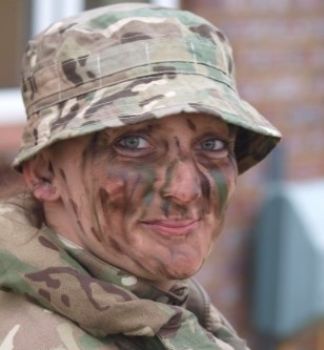 Sergeant Instructor Whitney Early, aged 26, volunteers at Derbyshire ACF’s Eckington detachment, and works full-time in the distribution industry in an administration based role. She credits the ACF with helping her to gain skills and qualifications that have benefitted her day job.

Whitney, who lives in Chesterfield, achieved her First Aid at Work qualification through the ACF, and thanks to this is now an appointed first aider in her 9 to 5 job. She explained: “There are so many benefits about being an adult volunteer. I’ve gained many new friends through the ACF, as well as gaining my First Aid qualification and shooting range certificates. If volunteers want to they can take part in BTEC and Duke of Edinburgh’s awards, as well as having the chance to gain leadership or activity based certificates to allow them to lead adventure training activities for example.”

Joining the ACF as an adult volunteer three years ago, was a great decision for Whitney and she has not looked back since. She continued: “I was previously a cadet many moons ago. I joined when I was 13-years-old and only stayed with the cadets for about three years as when I turned 16 I got myself a full-time job and my time became limited. I was away from the ACF for about seven years before I decided to re-join as an adult volunteer.

“Initially, I thought I would fill out the application form and see what happened but looking back now it was the best thing I did coming back, I have not regretted my decision.”

Describing some of her volunteering highlights Whitney explained that she has had the opportunity to travel around the UK by taking part in cadet-based training activities, as well as recently taking part in a visit to Gibraltar where the cadets went on a battlefield tour and took part in offshore sailing.

Whitney concluded: “For me the best part of being an adult volunteer is watching the cadets grow and progress into being young adults. Seeing what the cadets do during their time in the ACF is amazing, to have the sense of achievement that I have helped them and been a part of their cadet journey is amazing.”