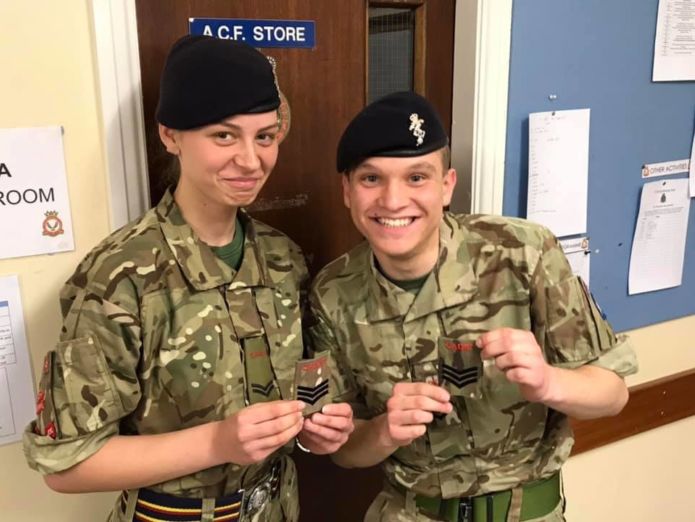 In 2015, I was on one of my regular visits to family in Cleethorpes so that I could make my annual trip to the local Armed Forces Day event. I’ve always had an interest in the military especially the Army, weapons and machines and had my parents take me to visit all the Imperial War Museums as well as lots of other places, so as you can imagine I was a little excited to be going to this event. There were lots of things to see and do. I got to speak to a lot of the Regular and Reserve Soldiers who were displaying at the event including the REME.

We got talking to an Adult Cadet leader who told me about all sorts of things that cadets can do, like camps and shooting guns and I was hooked. We were told that Kirton-in-Lindsey was my closest Detachment and I was eager to join but my parents were apprehensive. My dad worked for North Lincolnshire Council, and luckily for me he worked in the same office as the person in charge of Scunthorpe Detachment. My dad was discussing his concerns with his friends at work and the person in charge of Scunthorpe Detachment overheard him and said to take me to Scunthorpe and they would look after me and they already had another cadet with Autism, like myself with my Autism and ADHD, so had some understanding of the types of difficulties I might face. Unfortunately, I was too young to join, which was upsetting but I was excited for when I could but little did I know, in the meantime, they had been discussing me, my conditions and what they could do to help me.

Although I don’t live in North Lincolnshire, I wanted to go to Scunthorpe Detachment because I knew my parents were happy that I would be safe and get the support I need there and I trusted their judgement. Scunthorpe Detachment had a really good vibe about it, and we knew I would be welcomed into the cadet family and having Autism and ADHD wouldn’t be an issue.

The night finally arrived when I could go to the detachment. It was a busy place, lots of cadets everywhere, all busy doing things. I wasn’t sure what was happening and although excited, I was a little apprehensive at first. I wasn’t sure on what to do at that first parade, I was one of the quietest and shyest cadets there, which you would never guess today. I knew nobody so I mostly kept to myself and spent NAAFI on my own, but it wasn’t long until the others started involving me in things and the rest is history and friendships started from then on.

One of the first lessons I had was field craft, looking at why things can be seen, and how to apply camouflage cream. The lesson was outside, within the grounds of the Army Reserve Centre and the detachment’s sponsor unit, 147 Field Company, now part of 146 Field Company. Little did I know that this unit will become a feature in my future training and development with the Army Cadet Force. It was great, although we were instructed on the correct way to apply the cam cream, we didn’t get it right first time so I came away from that night covered in the stuff and needed two showers to get it off, but my love of Field Craft started there and then.

I’ve attended a lot of events during my four years in the Cadets, but some of my proudest moments are marching alongside Regular and Reserve units, knowing that my goal one day would be to join their ranks. I have done a lot since my first Company Field Craft Weekend, where I struggled, I hadn’t learnt my triggers and was having issues keeping calm & focused. I remember my Detachment Commander coming over and she laid on the floor talking to me, not about cadet things just everyday things like my future, school and what I wanted to do, taking my mind off the weapons handling test I was doing. Before I knew it, I had completed it and could take part in the exercise. I was living my dream.

In these four years I have been in the Army Cadets, I have attended 22 Cadet Camps; including four Annual Camps, several shooting weekends, four Christmas Camps and 14 Company Weekend camps. I have also attended two sports camps and most recently represented my County (Humberside and South Yorkshire) in Exercise Baltic Guard in Lithuania. I was also lucky enough to take part in a 6-part training session with 147 Field Company, although I wasn’t at the right age to go, my DC pulled a few strings to get on the session. It was great, we were shown the modern service weapons, how to strip them and load and fire them and actually felt like a mini soldier and what life in the REME would be like.

I have learnt so much, not just from the opportunities the Army Cadets has given me, or the knowledge passed on from some fantastic Cadet Force Adult Volunteers and Senior Cadets, but also about myself. All of this together has helped me become the person I am today. When I look back, I don’t recognise that person I was when I started back in 2015. Being an Army Cadet makes me proud and I have pride knowing that I am part of something greater than myself and even with my ‘disabilities’ I am still able to participate in all activities that cadets take part in. I have nearly achieved my 4 Star pass, I am a Sergeant and Cadet In Charge of Scunthorpe Detachment, with a year left to do my SCIC (Senior Cadet Instructor Course) & Master Cadet Course and to take part in whatever other opportunities come my way.

Thanks to Army Cadets, I have confidence, friends, learnt to socialise and enjoy it, developed independence, I am able to accept different rules for different places, challenged my fears, stepped out of my comfort zone and found fun, interaction and new experiences. I’ve also found the motivation for my studies and having achieved the GCSE results I needed to get into sixth form college. I have recently started studying BTEC Level 3 Engineering and BTEC Level 3 Applied Science, which are equivalent to three A levels. These were chosen specifically to support my planned future career in the REME.

The main influences throughout my time in Cadets has been my Detachment Commander, who recently moved to a County Post, and a former Cadet RSM who both helped me in so many ways and saw what I can offer, who have given me the time, a point in the right direction when needed and who are still keeping an eye on me ready to lay down and talk to me if I needed. I have been shaped by every Cadet and every Cadet Force Adult Volunteer I have met and all of those working in the background enabling activities to take place. I thank each and every one of them as without them I wouldn’t be the person I am today and writing this now because you have made me believe I have the ability to become a REME Soldier