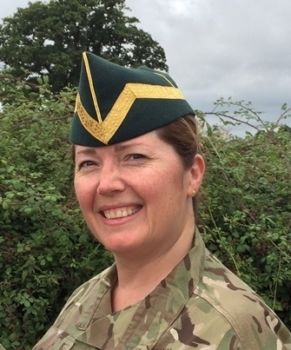 From the Army Reserve to the ACF: Helen Smail’s story

She had joined the Army Reserve as a way to meet new people and develop a hobby, completing her officer training after three years. When her Colonel suggested that she join the ACF as an adult volunteer, she wasn’t sure.
“Until then, I’d always thought I wouldn’t have patience for young people,” she says now. What began as an uncertain decision turned into a lifelong passion that has shaped her personal and professional development.

“You move somewhere and you have a new family”

“The ACF is like the Army Reserve,” Helen says. “You move somewhere and you have a new family. You understand the beast regardless of where you are. People have specific jobs and run specific training. And wherever you go, people want the tools in your belt. If you’ve got skills, they want your help.”
Her fieldcraft experience and knowledge of the military’s way of working were put to good use with the ACF curriculum. She found that former Reservists have a lot to offer cadets, particularly those who are keen to pursue a military career, answering questions and giving perspective on the Army Reserve experience: “Cadets want to know what’s out there after the ACF. If the University Officer Training Corps isn’t for them and the Army isn’t for them, they want to hear about the opportunities as a Reservist.”

Initially, Helen had a lot to learn about working with young people. She wasn’t sure if she would enjoy it or be any good at it, but that quickly changed. She loved the tangible impact she had on the cadets, how much fun she had with them and how they challenged her abilities.
“It’s a bit of a stretch,” she says. “It’s enjoyable but not always easy. You can see a lot of positive changes from your influence. It’s great to see a cadet come in at 12 years old and then see them leave at 18, when they’ve come such a long way in confidence, self-worth and their ability to achieve. It’s powerful.”

So powerful, in fact, that it prompted a major career shift. Helen was working as a Research Scientist, but she retrained to become a Science Teacher and further her positive influence on young people. She’s been teaching for over 10 years now, a career she would likely not have considered if it weren’t for the ACF.

Opportunities for leadership growth in the ACF

Throughout her time with the ACF, Helen has volunteered with four different companies in four different parts of the UK. Even though they differ in size and location, she says they all share a common thread: “Aspire to achieve is our motto and every single adult is trying to do something to allow cadets to achieve.”
In her current role as Officer Commanding, Helen manages over 30 adults and 200 cadets. “It’s like running your own little train set,” she says. “I oversee seven detachments – planning training weekends, managing people, making decisions, looking after both the adults and the cadets. It’s an extensive role, and very rewarding.”
Through the ACF’s partnership with CVQO, an educational charity, she’s completed a Master’s Level vocational qualification in Leadership, one of the many programmes the ACF subsidises for adult volunteers. After a lengthy self-evaluation project, she now has a qualification that’s recognised by many employers: “It nearly killed me to do it – it was a lot of work – but I realised how much I’ve accomplished.”

Seeing what other people can achieve

Even though there are lifelong friends to be made, outdoor adventures to be had, and professional qualifications to be gained, the biggest reward the ACF offers its adult volunteers is seeing others achieve. Helen reiterates this with the story of a cadet she’s known for over three years, who’s grown from a quiet and reserved young woman to a confident leader.
“She’s now a Regiment Sergeant Major, which is the highest rank you can get as a cadet. She’s amazing. She works at the National Challenge Service now [a charity that runs summer camps for young people], and her capacity is massive. I think she’d say a large part of that is from the ACF encouraging her to take on leadership roles.”
Helen says that these stories happen every year. “And you think to yourself, look at what they’re doing now. Seeing people achieve and become something they weren’t when they arrived – we all get a warm fuzzy feeling when that happens.”

Use your Reservist skills to volunteer with the ACF

That’s the most important thing former Reservists get out of volunteering with the ACF – a warm fuzzy feeling knowing they’ve helped a young person achieve. Cadets need guidance, inspiration, experience and discipline – who better to provide that than former Reservists?

If you want to use your military knowledge and skills to transform young people’s lives, join the Army Cadet Force as an adult volunteer today.